Karate in the modern world

Modern karate clubs keep up with the times and dont dwell to much in the past and it has become an all round sport and effective martial art, it will help in the following ways.

It also helps you develop the skills needed to defend yourself.

At My club you will learn.

We practice hard and have loads of fun with a lots of laughter, our standards are high as I expect a great deal of personal commitment in order to achieve fitness and suppleness, I push the students hard so that they can reach their full potential.

At a sporting level even competing at a national championships if there is an individual desire to do so.

These new found skills will help to tone the body and mind, gradually developing the individual into a self-aware and more confident outgoing person, parents and teachers often report on the improvement in schoolwork and behaviour of children who train regularly.

It doesn't matter what your physical ability or age is, male, female or child, small, medium or large karate enables you to reach your full potential.

This is the direction of modern karate whilst keeping a grasp of the tradititional ethics and teachings of the founding Japanese Sensei's as one said,

"The ultimate aim of karate lies not in victory or defeat, but in the perfection of character"

This is the certificate that is awarded for the first grade of 9th Kyu it is symbolised by a Red Tab on a white belt the first step on the way to the coveted Black Belt. 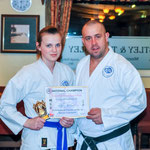 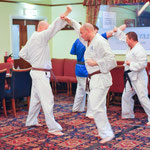 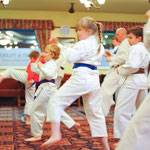 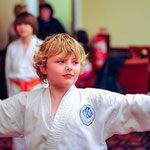 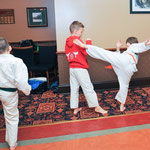 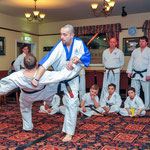 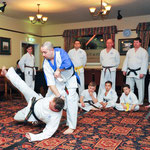 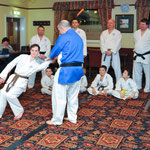 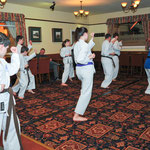 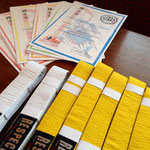 You got so far you must be interested hit the club badge, drop an e-mail or come and see us!

If you require any infomation about Astley Shukokai karate club please contact me below.